Escape Room style fever pitch excitement as participants using a bag of kit and the Go Team app trace their steps to gather clues to establish an alibi, find the stolen diamonds, and Escape the Mob.

Escape the Mob begins with a mysterious video telling teams that they are incriminated in the perfect heist.  They were in the wrong place at the wrong time. Teams have a limited amount of time to develop an alibi.  Guided by the Go Team app teams set out on a journey, completing challenges that will gain them points and also help them determine the exact time they were at each place on the night of the robbery. And in a final twist if teams can collaborate successfully they may work out the whereabouts of the stolen diamonds!

Go Team Escape the Mob is a totally inclusive and highly engaging team bonding activity. With a limited amount of time, a competitive theme and a variety of challenges including photo, video, cryptic questions, ciphers, symbol swapping alpha puzzles, pattern identification, strange smells, mysterious sounds and theatrical performances, each individuals different skills and creativity comes into play.  Collaboration comes into play in the final moments to ultimately find the jewels and Escape the Mob! 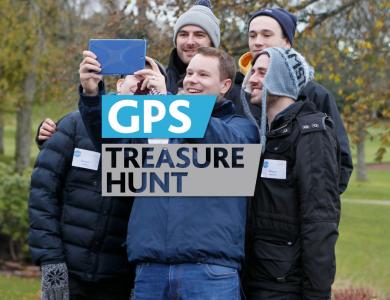