The fabulous Eaves Hall Hotel in Clitheroe played host to a fun-filled night with a fantastic group from Coca Cola. The Interactive Quiz was the entertainment of choice for the guests, and as they arrived into the Ball Room Suite for a wonderful dinner, the sense of excited anticipation began to grow.

As the Sweet was being cleared the now famous TCC music kicked in and we were off and running. There was a hugely competitive atmosphere right from the start as The A-Team and Simply the Best went head to head in a bid to take home the company Coca-Cola Winners Trophy. With a number of challenging and often hilarious Quiz Rounds ahead, it was sure to be a fun-filled night - and it didn't disappoint! The Guess Who Quiz Round proved difficult for some (especially Neil, who I don't think has ever seen a famous face...ever!), and the General Knowledge Round proved no better...particularly for  Simply the Best, who weren't really living up to their name!

The next round, the mighty Boomwhackers Round, provided some hilarious fun, as The A-Team struck up a wonderful rendition of Jingle Bells, which was quickly followed by some sort of attempt at We Will Rock You by Simply the Best. It seemed obvious which way the points would go in that one! Fortunately the Questions in Sport Round proved much better for Simply the Best, and the team lying in second place for so long managed to claw some of the gap back. It seemed that the Movie Quotes Round was a little easy for The A-Team, particularly as they had two famous Movie Characters in their midsts, Jaws from James Bond and Woody from Toy Story!!! 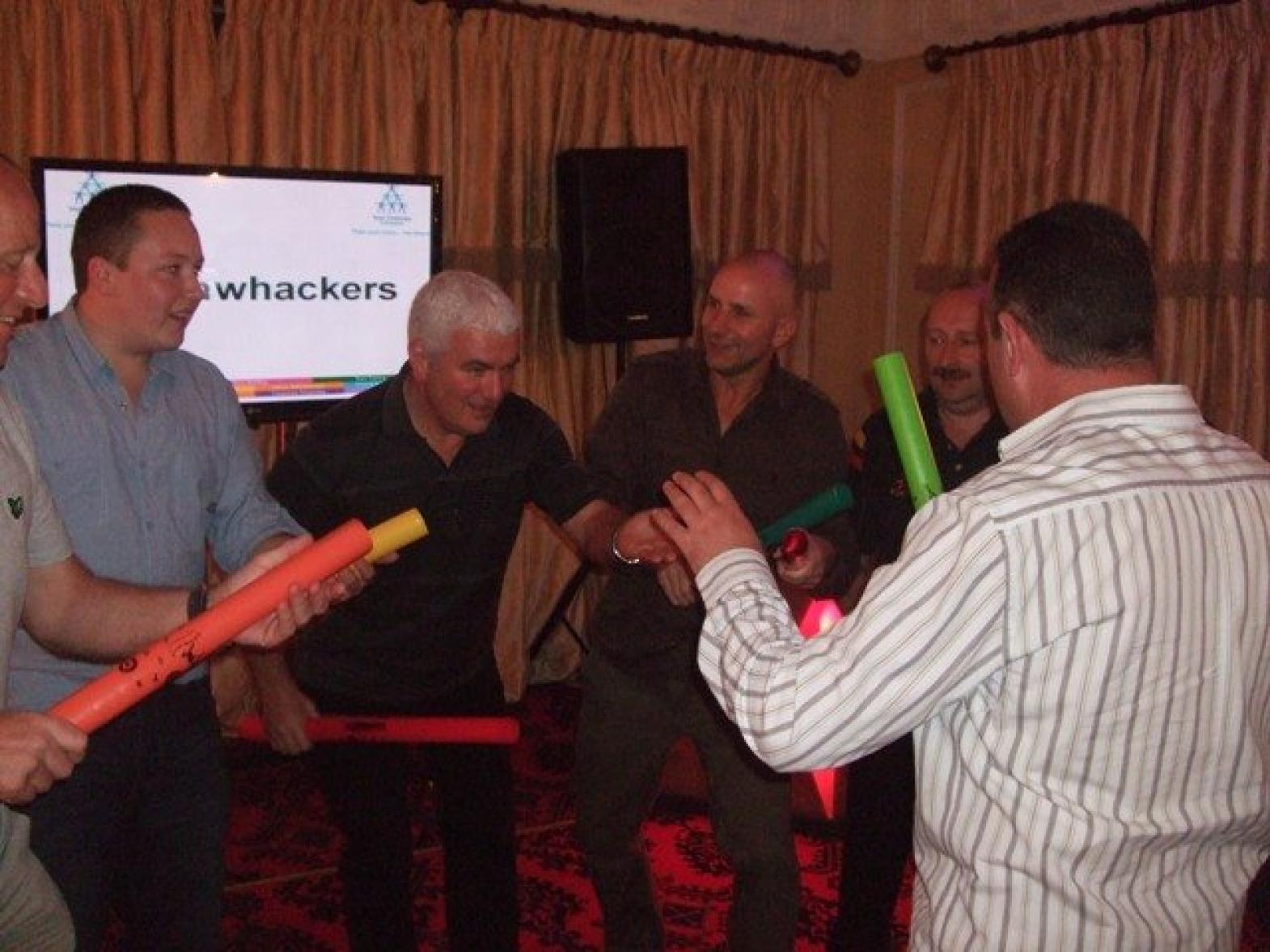 As the fantastic Evening Entertainment drew to a close, there was time for one grand finale...Bridge Build. It seemed that perhaps 'tiredness' was getting to the teams at this point, as both structures were completed and looked far from impressive. Indeed, both Bridges failed miserably, with our RC Car driving straight into the canyon on both occasions. With no bonus points to be earned for the teams there, all that was left to do was add up the final scores and present the Winner's and Loser's prizes! I'm sure you have guessed by now which team were taking home the Wooden Spoon...up stepped Simply the Best to collect their Last Place Prize, and they seemed pretty happy with it!

That, of course, left the mighty A-Team victorious, and they were proudly presented with the Team Challenge Company Coca-Cola Winners Trophy. The night had been a fabulous success, and was throughly enjoyed by all in attendance. A big shout-out and thank-you goes to Dave and Steve for all their hard work in organising such a fun-filled evening. The group from Coca-Cola were an absolute pleasure to work with, and we at Team Challenge Company look forward to seeing you all again in the near future.

What a hilarious night of Evening Entertainment this was, and what a laugh we had with the boys from Coca Cola. From start to finish I have never seen a more competitive bunch, and when it came to the Boomwhackers, I have never seen a less talented bunch...! However, that added to the fun and banter of it all, I'm just surprised Neil didn't win with those GUNS! A great night for all, hope everybody thoroughly enjoyed it, and look forward to catching you all again soon.