TAQA Britania Ltd descended on the fabulous Thistle Hotel Aberdeen Airport  for an evening with 'The Qube' and Team Challenge Company. After a look round the games on display, a beverage to whet the whistle, a few concerned looking faces with Barry and Mandy turning up early to get some extra practice on 'Rebound' all participants settled down briefly for some of the Thistle Hotel's finest fare before the start of the Event. With full belly's and lubricated lips it was time for 'The Qube.' The teams were set, 'Barry's Babes' including Richard. Kerry's Qube's' and 'The Cunning Stunts' which definitely did not cause the hosts any pronunciation problems what so ever.The first event in The Qube was 'Dead Stop' where you have to land a ball on a platform 7 feet in the air. Sounds fairly simple, you would think. Many, many lives were lost here with only very few successes bringing in the first money for the teams. Guy reckoned he should have just reached out and placed the ball, Simon didn't live up to his t-shirt and captain Barry thought it a better idea to hit the referee in the face with the ball. 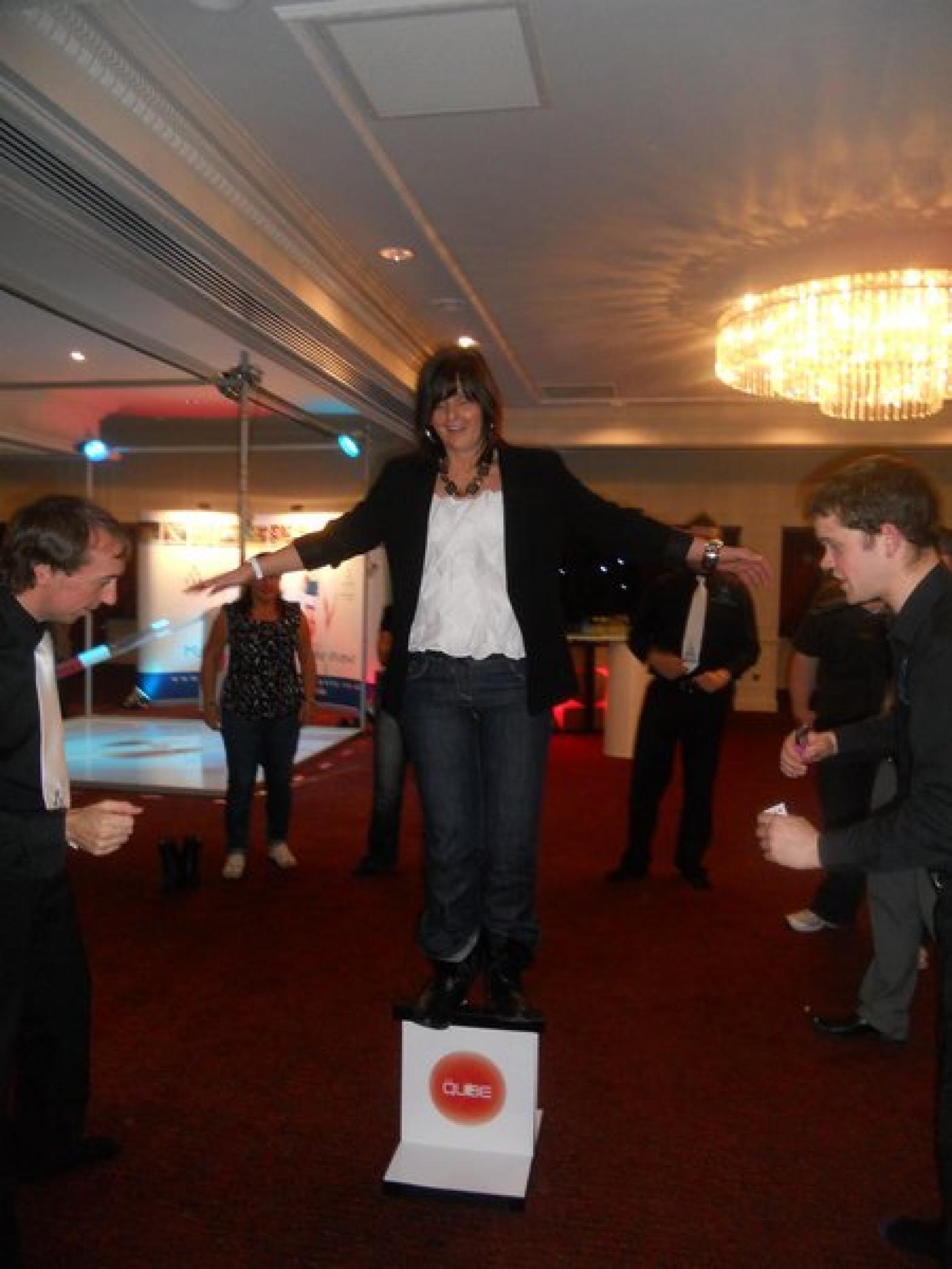 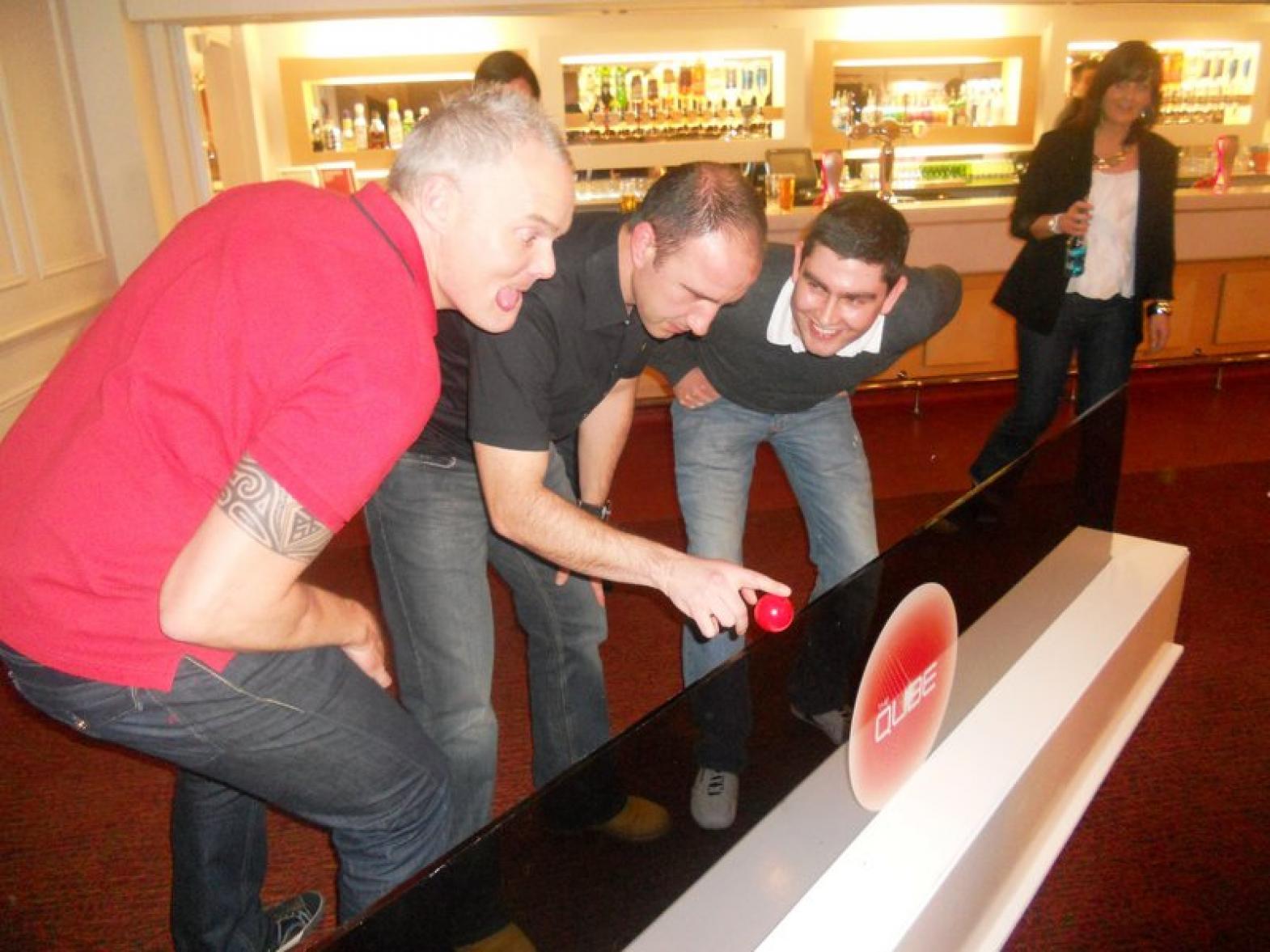 Delighted to hear that the entire TAQA team enjoyed a fun-filled (and highly competitive) evening of entertainment in the shape of The Qube. Gerry, Bob and the rest of the Team Challenge Company crew came back with some hilarious stories of triumph...and failure! It was an absolute pleasure to work with Kerry in ctreating and designing The Qube event for the team at TAQA, I sincerely hope you all enjoyed yourselves, and that the photos serve as great memories of your evening with us. Look forward to working wiht you all again soon, bring on the Re-match! Jonathan

Supberb night had by all, the crew were great and many giggles were had by all even though Barrys Babes came last ;( would love another go, hopefully i can live up to the name Gazell and be in a wining team ;) Sorry Baz

Brilliant night, the games were fab. The team challenge crew were exceptional and mostly encouraging!!!! Real good feel to the whole event and worth it. Cant wait to make it 3 wins out of 3..... Thanks again Team Challenge, was a pleasure x

Kerry, you and the team were incredible contestants and almost beat The Qube, haha. I think Gus should enter the 2012 Olympics in the Gymnastics section and Stuart should take up another sport thats none drink related ! Well done everyone and have my name down to be the ref for your next Team event so watch out Paula hehe! Gerry

Didn't really think it was going to be "my thing" but I had the best time...absolutely loved it & even felt myself getting slightly competitive as the night went on (sorry for the colourful language!!) Thankyou very much to the Team Challenge Crew...specially the young guy who kept us entertained with his daft dancing! Hopefully cya all next time ;0) x