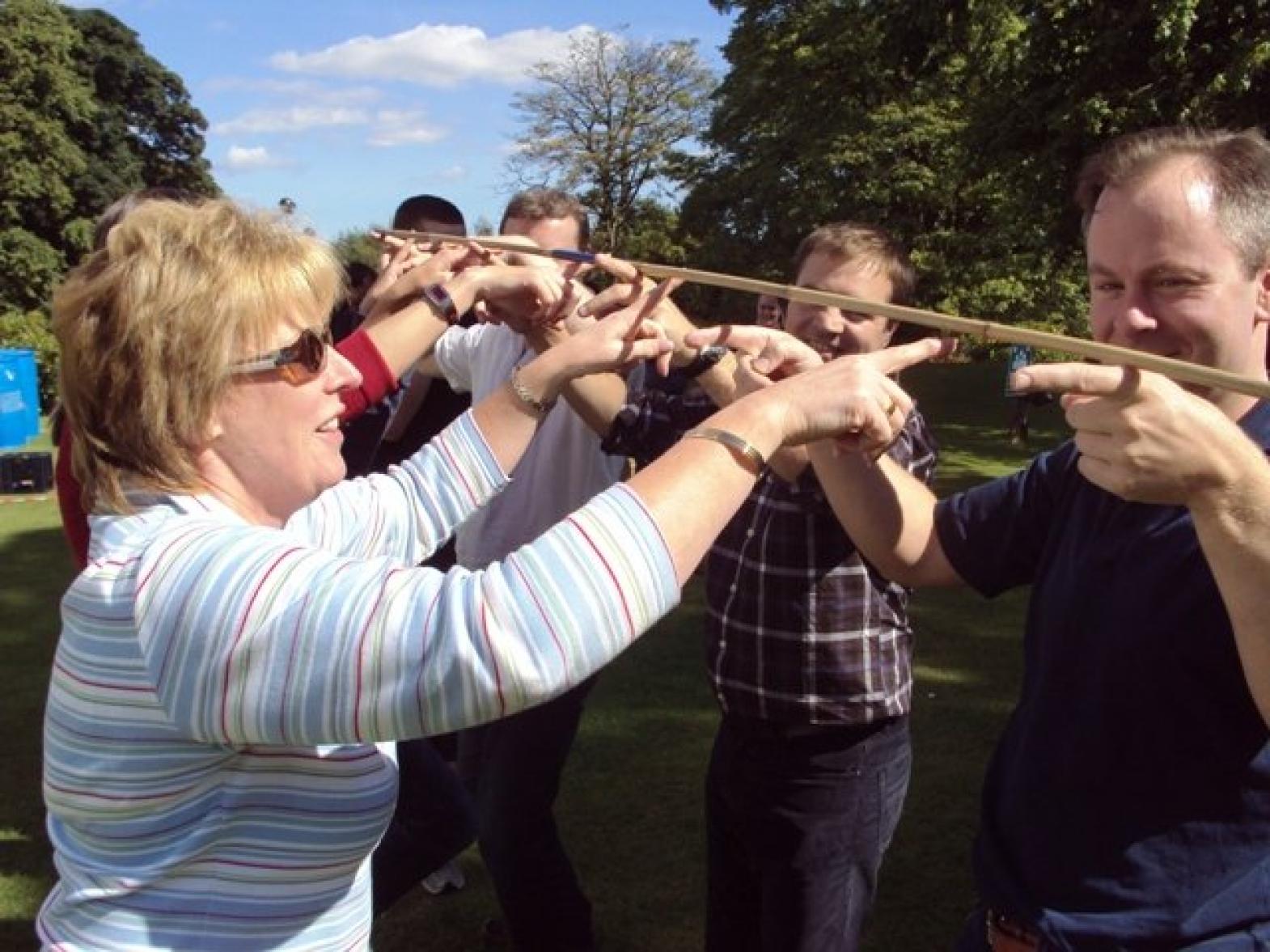 The fun kicked-off with our Helium Stick Ice Breaker, which was a lot more difficult than it first looked (as proved brilliantly by The A-Team). We then blasted straight across to Rollerball, where thinking outside of the box was key to success, as the Teams tried to keep a golf ball rolling for as long as possible using only the limited resources provided. Unfortunately for Team 2 and The A-Team, their competitors thought waaaay outside the box and recorded a quite incredible time of 97 seconds, and despite all of Owen's complaints, the early doors top marks went to seemingly unstoppable Team 1! A great way to start the Corporate Entertainment before moving into our rotational games.The Teams then when on to compete across three activities - the hilarious Mini Highland Games, the ever-popular Archery and the one where all of Grant's dreams came true...the Sheep Pen! It was here where teams giggled the loudest and came closest to losing their way (especially with Eddie the Shepherd in charge), but big points were scored by all teams right throughout the afternoon. Team 2 performed sensationally on the Archery, and The A-Team were world-class Welly Throwers over at the Mini Highland Games, so all scores were incredibly tight coming into the big finale on Laser Clay Pigeon Shooting! 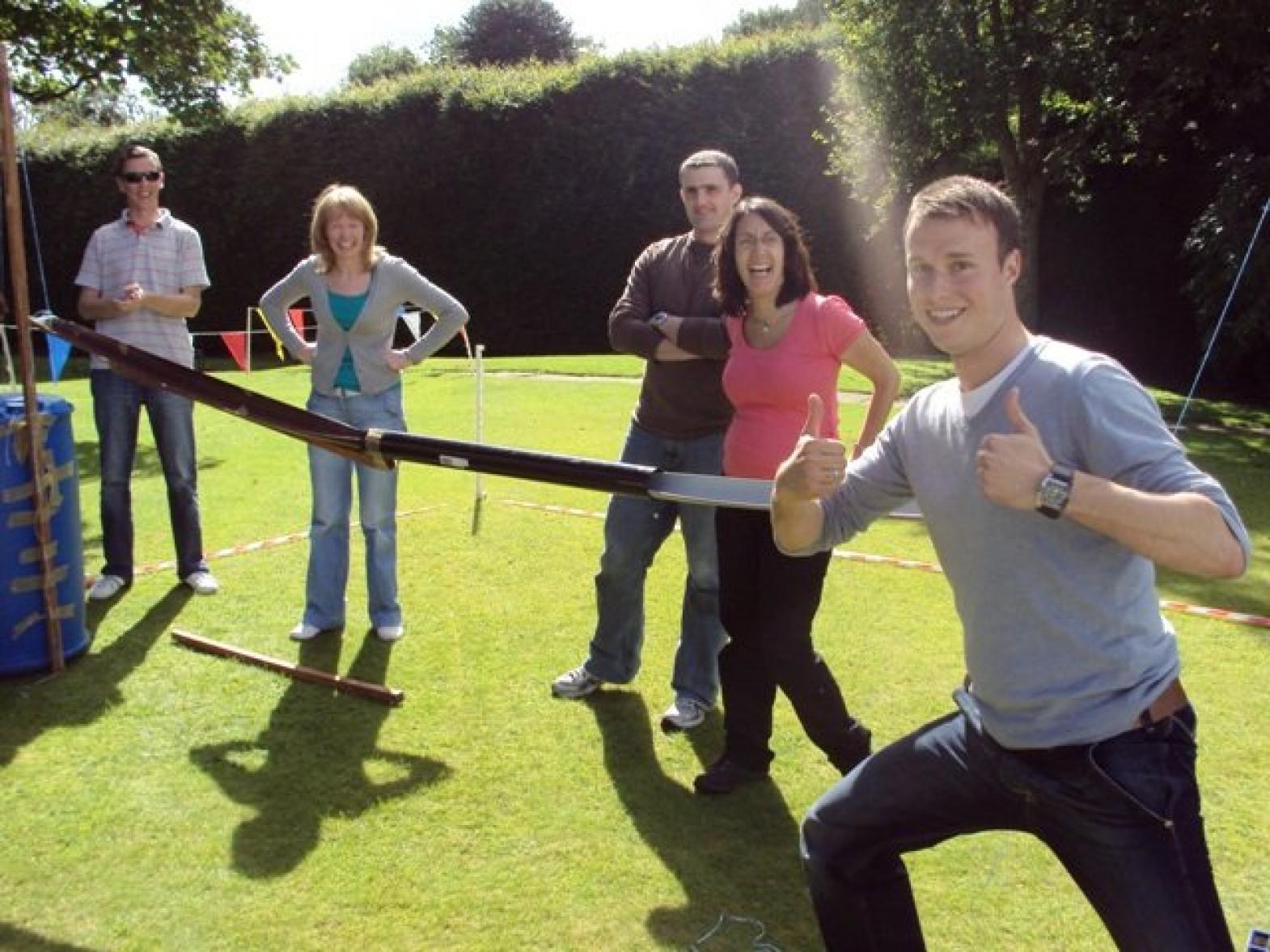 The afternoon had been enjoyed by all, and was brought to a close in style with a hilarious ride on the Bucking Bronco. A big thank-you must go to Jo, whose hard work and enthusiasm ensured that the entire day was massive success. The group from Standard Life Investments were a complete pleasure to work with, it was amazing to have professional photographer Peter in charge of the camera, and we sincerely look forward to working with you all again soon.

What a fantastic afternoon of Corporate Entertainment with an enthusiastic and energetic group from Standard Life Investments. Lots of great memories and excellent photos from the day (courtesy of the legendary Peter). I have so many personal highlights from the Event, including Eddie's crazy directions on the Sheep Pen, and that magnificent Rollerball effort by Team 1, quite amazing! The Laser Clay Pigeon Shooting was also full of hilarity, and I was hugely impressed by all the skill on show - as well as Dale's inexplicable luck! Well done to all teams on all your participation right throughout the afternoon, and a big cheer for Jo and her work in organising such a successful event. It was a great pleasure to work with all your group, and particularly nice to meet Euan again in an environment where I was giving him scores!!! Grant, remember your cowboy hat for next time around, look forward to seeing you and everybody else again soon

A massive thankyou to all the team at The Team Challenge Company. You really gave us a fantastic day with alot of laughs! Emma - you were a wonderful help getting everything organised for the day. I really appreciate all your help and especially your patience at all my little queries! Guys - what can I say - you really made the day such a great success and alot of fun for all my team. I look forward to working with you all again one day, J :o)